The medulla is right above the spinal cord and is an enlarged extension of the spinal cord into the skull. It controls vital reflexes like heart rate, breathing, sneezing, coughing, vomiting and salivation through the cranial nerves which control muscle movements in the head, sensations from the head and majority of the parasympathetic output to the organs. Damage to the medulla mainly results in fatality, and overdose of opiates are life-threatening due to the suppressed activity of the medulla.

The pons lies anterior and ventral to the medulla. Like the medulla, it contains nuclei for several cranial nerves. About an inch long and slightly larger and broader than the medulla, the pons acts as the bridge for nerve signals traveling to and from the cerebellum and carries signals between the superior regions of the brain and the medulla and spinal cord.

The cerebellum is the large wrinkly hindbrain structure. It is known to be vital for “balance and coordination.” Damage to the cerebellum would result in having trouble shifting attention back and forth between visual and auditory stimuli.

The midbrain is in the middle of the brain. The roof of the midbrain is called the tectum. (Tectum is “roof” in Latin). The swellings on each side of the tectum are the superior colliculus and the inferior colliculus. Both are crucial for sensory processing, the inferior for hearing and the superior for vision. Forming the anterior region of the midbrain, the cerebral peduncles contain many nerve tracts and the substantia nigra. Nerve tracts passing through the cerebral peduncles connect regions of the cerebrum and thalamus to the spinal cord and lower regions of the brainstem. The substantia nigra is a region of dark melanin-containing neurons that is involved in the inhibition of movement. Degeneration of the substantia nigra leads to a loss of motor control known as Parkinson’s disease.

The forebrain is the most prominent part of the brain. It consists of two cerebral hemispheres; the left and right. Each hemisphere is organized to receive sensory information, mostly from the opposite side of the body and to control muscles.

The outer portion is the cerebral cortex. (Cerebrum means “brain” and Cortex means “shell” in Latin.) It contains up to six distinct laminae, layers of cell bodies that are parallel to the surface of the cortex and separated from each other by layers of fibers.

The optical lobe is at the end of the cortex and is the main target for visual information. Destruction to any part of the striate cortex results in cortical blindness in the related visual field. A person with cortical blindness would have normal eyes and pupillary reflexes, but no conscious visual perception and visual imagery (not even in dreams). People who suffer eye damage become blind, but if their occipital cortex is intact and have previous visual experience, would still be able to imagine visual scenes and have visual dreams.

The parietal lobe lies between the occipital lobe and the central sulcus. The area posterior to the central sulcus, the postcentral gyrus, receives sensations from touch receptors, muscle-stretch receptors and joint receptors. The parietal lobe monitors all information about eye, head and body positions and passes it on to brain areas that control movement. It is crucial not only for spatial information but also numerical information. For example, if you see something in the upper-left position of the visual field, your brain needs to know which direction your eyes are turned, the position of your head and how your body is tilted before it can determine the location of what you see.

The frontal lobe contains the primary motor cortex and prefrontal cortex. The posterior portion of the frontal lobe, called the precentral gyrus, is specialized for control of fine movements like moving one finger at a time. Different areas are responsible for different parts of the body, mostly on the opposite side but with slight control of the same side.

Diagram of the Human Brain 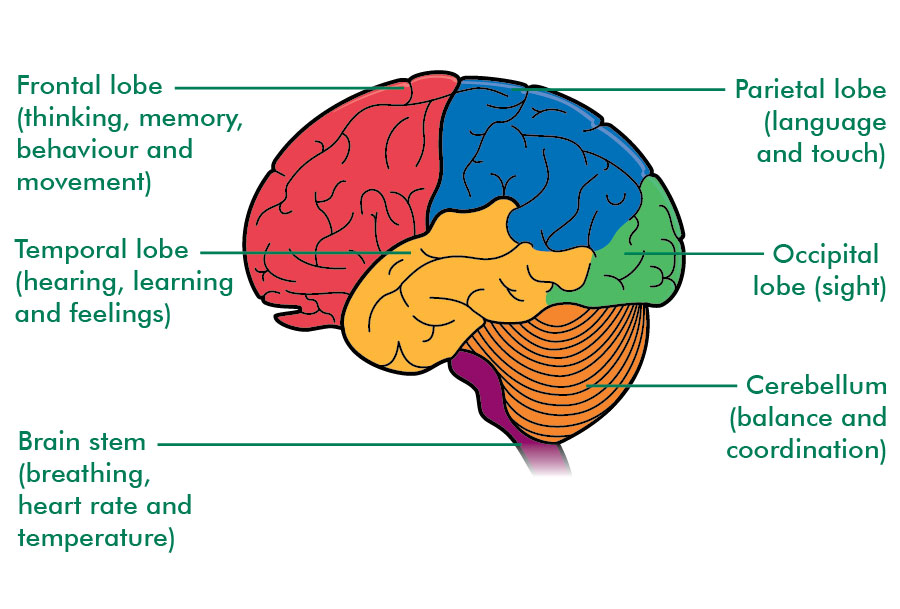 The above is a diagram of the general parts of the brain according to their function.